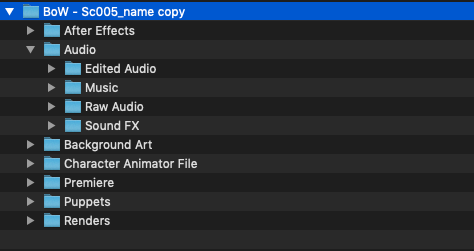 Why is it so important for your Adobe Character Animator pipeline? In this short tutorial, we’ll explain.

Creating a file structure for Adobe Character Animator is really important – especially when you are creating multiple episodes with various assets you want to keep track of.

Having a clear file structure is all about being organized. This is critical – not just for your workflow. It is critical if others are going to try and make sense of what you have created later on.

So in this tutorial, we are going to share how we build our file structure.

This is the top-level folder that will identify your project. Let’s use ‘Bubbles of Wisdom’ as our case study. The top level folder is;

Because we have lots of things in our ‘Bubbles of Wisdom’ folder (such as a Reference Images, Documents, Potential Title Music) we need somewhere that our actual show exist. So this is in a folder called;

Here you can decide what naming will best suit your production. If it’s a few episodes you can name them whatever you like. If it’s a longer form series, you may want something a bit more specific. With ‘Bubbles of Wisdom’, we used;

‘BOW’ was just the acronym to identify the show.

‘S01E01’ Means Series 01, Episode 01. By putting this next, all episodes will be sorted numerically. First by the Season number, then by the episode number.

So the next episode is named;

This is the nuts and bolts of naming. We always have these folders sitting in each episode folder;

AFTER EFFECTS
Contains the After Effects project files.

AUDIO
Audio is where we keep all our audio files. Inside the Audio folder you will find;

These are all pretty self explanatory.

BACKGROUND ART
This is where we keep any background images, as well as unique props and objects.

CHARACTER ANIMATOR
This is where we keep the Adobe Character Animator project files.

FINAL COMPILE
This is a folder where we place the final rendered version of the episode. No Final_Final_This_is_it_Final.mp4 file to go and find somewhere!

PREMIERE
We do our editing in Adobe Premiere Pro. This is the folder where we keep the project folders for that.

PUPPETS
We copy our .puppet files and place them here. That way the puppet won’t accidentally get moved and throw everything out.

RENDERS
Here is where we keep out rendered work during the process of making an episode. We may need to render something from Character Animator, Premiere Pro or After Effects. We put everything like that in here (except for the final render which gets moved to the Final Compile folder.

Wow – that is a lot to remember. So here is one last little trick we use, so you don’t have to remember.

At the start of any new project, we copy and paste a pre-made, blank file structure into our project. We then modify the names to suit that particular project – saving a whole lot of time and keeping everything consistent across all our work.