SETTING YOUR PUPPET TO WALK

Have you set a puppet to walk and found its wandered off or ended up in the wrong position? In this tutorial we’ll break down what’s happening and how to properly use the walk behaviour.

Walking can be a little confusing. You may have noticed that some puppets walk on the spot, like the TOON LOONS, while other puppets like FREE DUDLEY will wander off-screen. So what is going on!?

It’s all to do with the walk settings. In this tutorial I’m going to import the TOON LOONS TEEN puppet ‘Kodie’. You can do the same – or use your own puppet – providing it has been built and rigged for walking.

Once you Import your puppet, select it in the Project window and hit the little clapperboard icon to add it to a new scene.
Now, if I hit the left or right arrow keys, Kodie will walk on the spot. 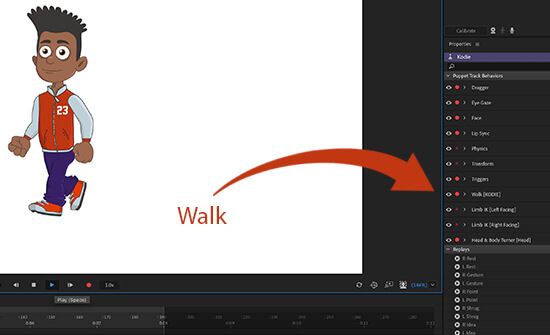 If we look over on screen right, to the Puppet Track Behaviours window we should see a list of behaviours for this puppet. We want to look at the Walk settings. So collapse the Walk [KODIE] dropdown menu. 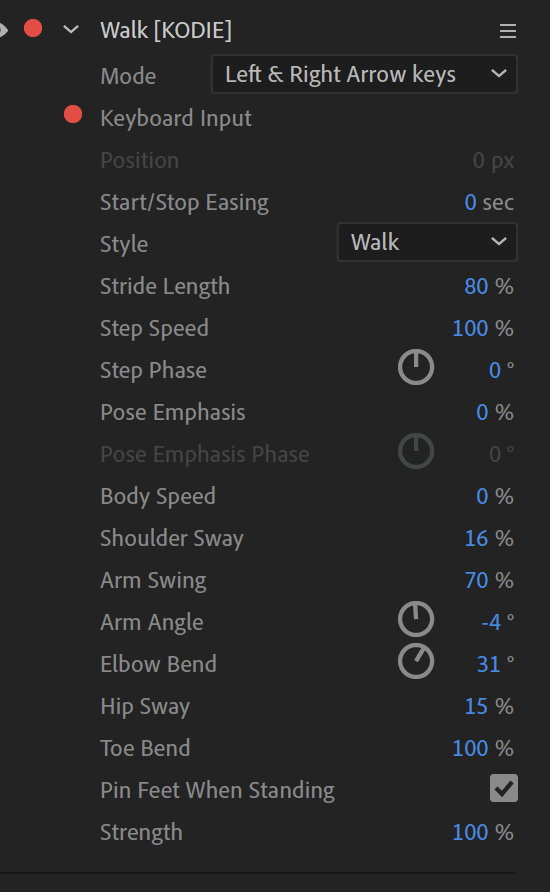 Lets take a look at each of these settings.

Next is Keyboard Input. This is just letting you know that it is currently armed to work with the Left & Right Arrow Keys Mode we have set. (This setting will grey out if you change the Mode to Immediate or Position Based). 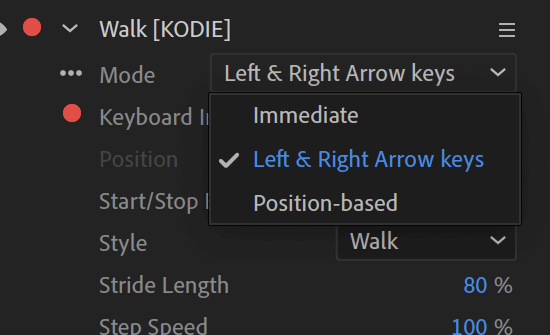 Start/Stop Easing is a blend mode that helps transition from the walking state to the standing state. If you are using an ElectroPuppet, we have set this value to ‘0’. This only requires a very small value if you wish to use it. Try changing it to ‘0.2’

Now use the arrow keys and watch the transition from walking to standing. If you prefer, you can leave the setting at ‘0.2’ – or if you want it back how it was, just enter ‘0’ into the field. 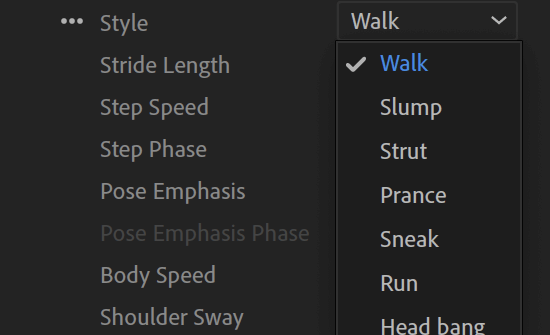 Style is the style of walk we are using. Here you can set your puppet to Walk, Slump, Strut, Prance, Sneak, Run and Head Bang. These can be fun to play with. Try changing the setting from Walk to Prance. Now hold the left or right arrow key and have a look at how your puppet is walking.

[This is why walking on the spot is useful when setting up a puppet. We can see changes to a walk much easier than if the puppet was walking off-screen.]

When you changed the setting did you notice a little white ‘X’ appear on the right of the dropdown. That means we have changed a setting from the puppets default. 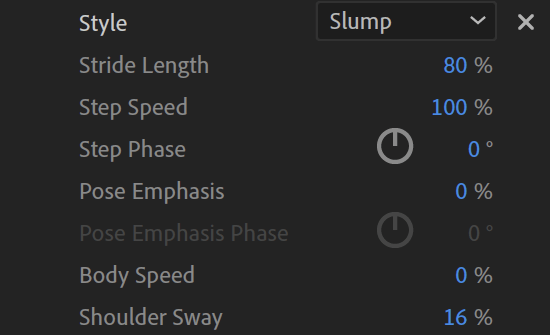 Click the ‘X’ and the changes revert back to the default. In this case the Walk setting.

This is great to know – because you can play with different settings, and always get back to the default by hitting the little white ‘X’.

Stride Length controls the length of each step. Sometimes you may want to have a character take little steps, other times larger. It all depends on the puppet and your own preferences.

Step Speed sets the speed of each step.

Pose Emphasis determines if the character holds a pose. Meaning when the puppet reaches the end of a step, it holds the pose for a moment. This setting sets how long. Try changing that to 50 and taking a look at the walk. Pretty neat. Now make it 70. Pose Emphasis is a stylistic choice that might suit your animation. Let’s hit the little ‘X’ and take it back to the default ‘0’ setting. 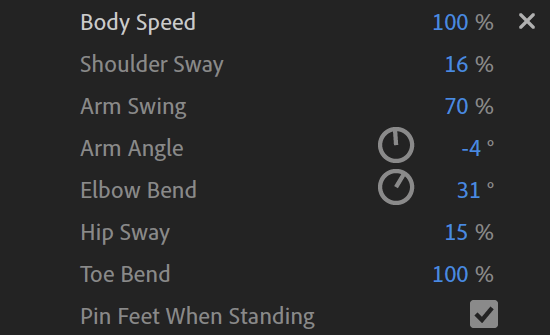 Body Speed is the setting that determines if your puppet will walk on the spot or wander off-screen. At the moment it is set to ‘0’.

Change it to ‘100’. Now try hitting the arrow key. Your puppet should start walking off-screen. If you try a slower setting, like 29, your puppet will walk the same, but will move across screen slower. Their feet may also look like they are moonwalking or slipping a little.

When we set a puppet to walk in an animation we can use Left & Right Arrow Keys or Position Based. There are positives and negatives for both – and we will get into those in a moment. For now hit the little ‘X’ to take the Body Speed settings back to ‘0’.

What comes next are a series of settings that you can experiment with. They are all pretty self-explanatory;

If you want to have a play with all of them, try going up to Mode and setting the walk to ‘Immediate‘. Your puppet should be walking on the spot. Now try various changes to these settings. They will update immediately so you don’t have to keep using the arrow keys to check what you have changed. Have fun with it!

When you are done, return the Walk Mode to ‘Left & Right Arrow Keys‘ and hit all the little ‘X’s’ to get everything back to their default settings.

LEFT & RIGHT ARROWS VS POSITION BASED

Many people choose setting the Walk Mode to Left & Right Arrow Keys and having the Body Speed set to ‘100’. That way the puppet will walk across screen like a computer game character. So what is the problem with this approach?

Now scrub back along the timeline. The character should walk backwards to the start position as you would expect. Now hit play again. The character walks to the middle of screen as you expected, right?

But here is the problem. If you jump the playhead to the start of the timeline, and hit refresh, the puppet is placed in the default middle of the screen. Not off-screen like we wanted. If you hit PLAY, the puppet will walk off to the left and NOT stop where we wanted it to. What is going on?

If you need to use this approach (and sometimes you have to) I suggest you make sure you first use one of the Transform settings, like Position X, to set and keyframe a starting point for your puppet. Then hit refresh before playing the scene each time. That will force the puppet to always start where you want it to. 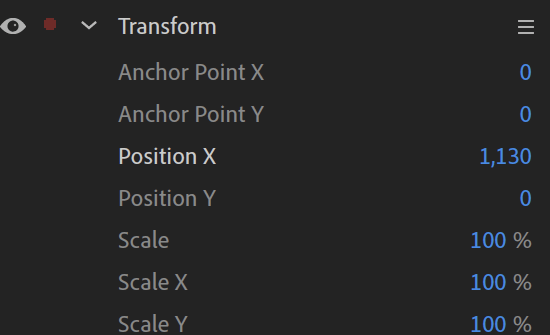 The other way we can set a walk for a puppet is to use Position-Based controllers. To do that, change the Mode to Position-Based. Place the playhead at the start of the timeline. Now we are going to set a value in the Position setting. Let’s try ‘1,100’. 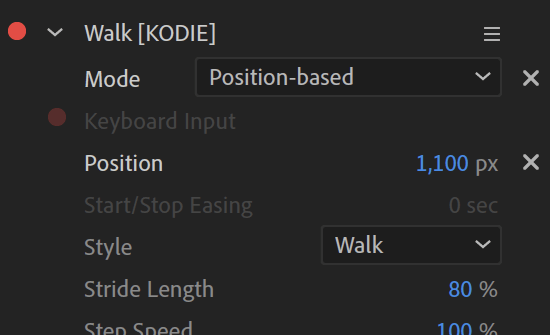 That takes the puppet off-screen right. So now we want to set a keyframe for that setting. To do that we are going to hit the little stopwatch icon to the left.

It will only appear when you hover your mouse over the left of the Position setting.

Great. Now jump forward on the timeline to say, 2 seconds.

Now we want to set the stop keyframe. So again, we will enter a value. Let’s try ‘-300’. That takes our puppet a bit past halfway. (If you don’t move the playhead to the 2 second point, you will save your new value over your start position – so make sure you do that first!).

Because we have already engaged keyframe mode, this keyframe gets automatically set for us. (If you hit the stopwatch again, you have turned OFF keyframe mode. Just undo to get it back.) 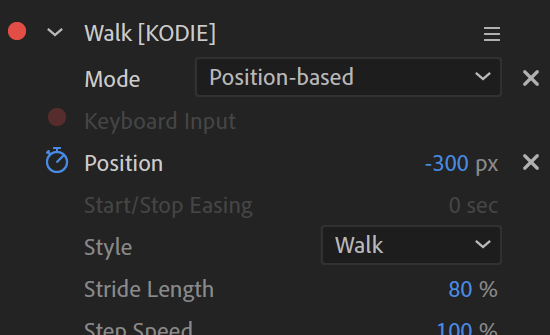 Now drag the playhead back to the start of the timeline and hit play. That looks pretty good – but the walk is a little faster than I wanted. So I can just drag the second keyframe along the timeline a little to slow the time it takes down a little.

I’m going to drag it to 3 seconds.

And that looks great!

In this tutorial we have looked at the settings for the walk behaviour and gone over the different ways we can set a walk in an animation.

There are a few more things to explore with walking – but we will leave that until our next tutorial!